In 1985, Goldman Sachs is selected as one of the first six non-Japanese firms to join the Tokyo Stock Exchange, allowing the firm to compete on equal footing in the Pacific Basin with some of Japan's largest banks. 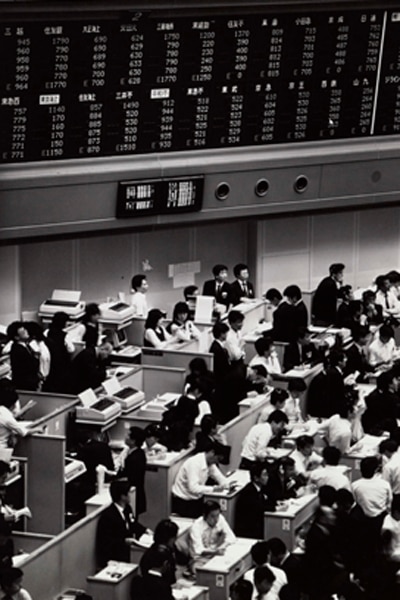 In the mid-1980s, the Tokyo Stock Exchange was the world’s largest after New York, with one third of total global equity trading volume. Yet it was entirely closed to non-Japanese firms. Global banks wishing to trade on the exchange had to do so through local brokers—and pay the associated commissions.

Japan’s major trading partners were pushing the government hard to open up the country’s financial sector. The United States and Japan’s ad-hoc Yen-Dollar Committee had signed an agreement for the liberalization of Japan’s financial markets in May 1984, but even with this, the Exchange remained a closed club. Goldman Sachs had opened its office in Tokyo in 1974 and was active in the Japanese market, but had to send its trades through Nomura Securities.

In 1982, a year after Japanese firms first became members of the New York Stock Exchange, the Tokyo Stock Exchange modified its constitution to allow foreign members. However, membership was limited to 83 firms, vacancies were rare, and the price for a seat was prohibitive for many firms. In August 1985, in its first expansion since 1949, the Exchange announced it would increase its membership by 10 seats. It would select new members after examining their management and financial strength; for foreign securities firms, the Exchange would also evaluate their volume of Japanese business and length of time conducting business in Japan.

For Goldman Sachs, in addition to further elevating its profile in Japan and throughout Southeast Asia, this accomplishment allowed the firm to strengthen its operations in Tokyo, providing clients in the Pacific Basin with expanded trading and investment banking services. The firm could now compete on equal footing with some of Japan’s largest and most prominent banks. As it continued to cultivate a strong relationship with Japan’s Ministry of Finance (MOF), Goldman Sachs would win notable mandates during the wave of privatizations that swept through Japan in the late 1980s and into the 1990s. Among these were the MOF’s first global offering, that of Japan Tobacco, in 1996, the IPO of NTT DoCoMo in 1998, and  three consecutive equity offerings for the country’s telecoms provider, Nippon Telegraph and Telephone (NTT) in 1999 and 2000.