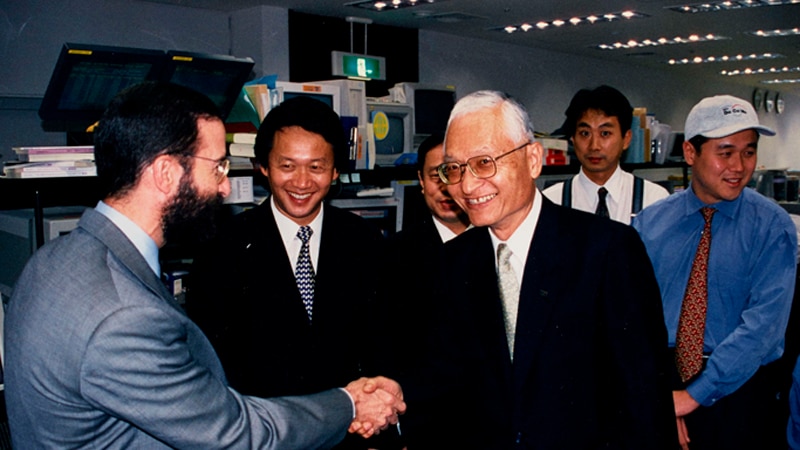 Goldman Sachs jointly lead manages the 1998 initial public offering of NTT Mobile Communication Network, Inc., (NTT DoCoMo), the largest IPO in history at the time. Coming in the midst of Japan's worst recession since World War II, the offering restores confidence in global capital markets at a time when it is critically needed.

On the heels of the 1997 Asian Financial Crisis, Japan was experiencing its worst recession since World War II when in 1998 its leading cellular service provider, NTT DoCoMo, announced plans for a massive global stock offering. Around the world, companies were pulling stock offerings and investors were taking their money out of the equity markets. Goldman Sachs delayed its own planned initial offering at the end of September 1998 in order to wait for markets and other conditions to improve. Yet, the next month, the firm was able to co-lead what was then the world’s largest IPO: that of Japan’s NTT Mobile Communications Network Inc., better known as NTT DoCoMo.

In 1992, Japan’s national telco, Nippon Telegraph & Telephone Corp. (NTT), established a new cellular service provider called NTT DoCoMo from a carve-out of its mobile communications operations. The new company derived the name “DoCoMo” from the phrase “DO COmmunications over the MObile Network.” By 1998, it served 57 percent of Japan’s 36.5 million wireless subscribers. Even amid the severe 1990s recession, the cellular phone business had proven to be growing and profitable, resulting in strong demand for DoCoMo’s ¥2.12 trillion offering. It traded up 19 percent in its first day of trading to US$39,540 from the initial public offer price of US$33,163 and raised US$18.4 billion (US$28.3 billion in 2019 dollars), nearly US$5 billion more than the then-record IPO of its parent company, NTT, in 1986.

Goldman Sachs International and Nikko Securities Co. (NTT’s banker) were joint global coordinators and joint book runners for the offering, which turned DoCoMo into Japan’s third-largest company by market capitalization. In the years leading up to the IPO, Goldman Sachs had built a reputation in Japan for its strong research coverage, solid relationships with the Japanese government, and global perspective.

The DoCoMo IPO was a bright spot during a turbulent time for global financial markets, lifting Japan’s Nikkei Index and restoring confidence in global capital markets at a critical time. For Goldman Sachs, the historic offering further reinforced the firm’s status with institutional investors in Japan as a major distributor of equities at a time when distribution was still largely in the hands of domestic firms.