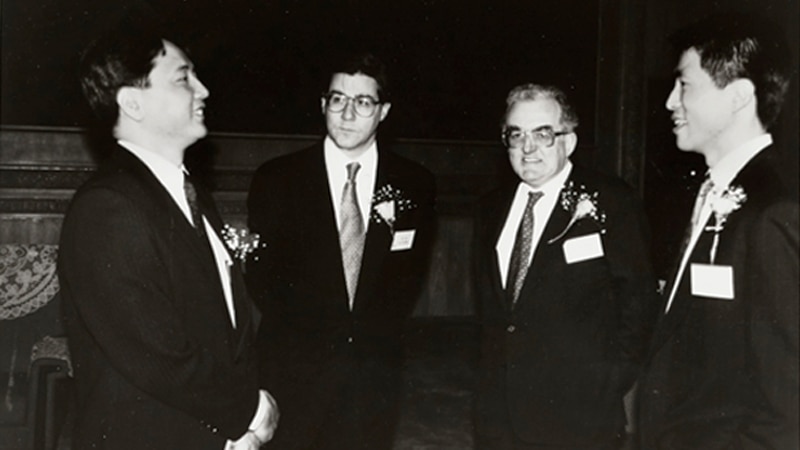 Since it began its shift in 1979 from a centrally planned, “command” economy to a more open, market-based system, China has demonstrated remarkable growth. In fewer than four decades, the country has transformed itself from a relatively poor, largely agrarian society to the world’s second-largest economy and an export powerhouse.

Goldman Sachs’ history in China predates a physical presence in the country. Starting in the early 1980s, the firm conducted much of its China-related business out of its Hong Kong office. Opened in 1983, Hong Kong served as the regional hub for Goldman Sachs’ rapidly growing presence at the time in other parts of Asia. Out of Hong Kong, the firm had worked on numerous significant Chinese transactions, including serving in 1993 as lead manager of China International Trust & Investment Corporation (CITIC)’s US$250 million 10-year Yankee bond, the first ever public bond offering by a Chinese issuer in the United States. The CITIC issue marked the entry of China into the international debt market for the first time since 1949. Goldman Sachs had also acted in 1993 as joint-lead manager of the HK$890 million H-share offering by Tsingtao Brewery, the first mainland company to be listed on the Hong Kong Stock Exchange.

In 1990, the People’s Bank of China authorized the establishment of two national stock exchanges in Shanghai and Shenzhen, making China the second socialist country to create a national stock exchange after Hungary. Witnessing the Chinese government’s continued efforts to open the country’s financial markets to foreign participation, Goldman Sachs recognized the significant opportunity that lay before the firm to lend its capital markets expertise to Chinese companies and to serve clients around the world seeking to invest in China’s rapid growth. It was time for the firm to establish a local presence in China.

On February 28, 1994, Goldman Sachs opened its first representative office in China, in Beijing. In August, the People’s Bank of China granted the firm a special seat in the Shanghai Stock Exchange with a license to trade B share issues reserved for foreign investors. Rounding out an eventful year, the firm opened a second office, in Shanghai, on November 18, 1994.

In the years that followed, the firm took on ever larger and more significant transactions in China, including advising the government on the privatizations of China Telecom in 1997 and PetroChina in 2000. In 2004, the firm established a joint venture in China known as Goldman Sachs Gao Hua Securities Company Limited. Through its newly-established strategic partner, Beijing Gao Hua Securities, Goldman Sachs could begin to offer securities services to clients in mainland China—something that, as a foreign firm, it could not do on its own at the time.

Establishing offices in Mainland China was a critical step in the evolution of Goldman Sachs’ Asia journey—one that reinforced the firm’s belief in the country’s economic promise and demonstrated its commitment to best serving its clients around the globe.