At the height of the global financial crisis, Warren Buffett’s Berkshire Hathaway invests US$5 billion in Goldman Sachs, further strengthening the firm’s capitalization and liquidity in turbulent times.

As the 2008 global financial crisis continued to challenge markets, leading Wall Street firms worked to ensure they were adequately capitalized and had sufficient liquidity. While many US firms looked overseas for capital infusions, Goldman Sachs found willing investors closer to home. The investments in Goldman Sachs in the fourth quarter of 2008 strengthened the firm’s capitalization while securing the endorsement – US$5 billion worth – of one of the world’s most admired investors.

Warren Buffett first met senior partner Sidney Weinberg in 1940 and had worked with Goldman Sachs for more than 50 years. This long-term relationship formed the basis for approaching the legendary investor about making a potential investment in Goldman Sachs to help the firm meet capital needs during the financial crisis. 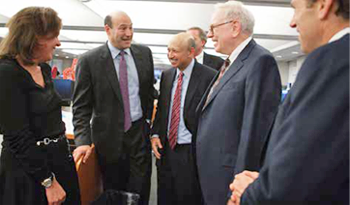 The day after the announcement, Goldman Sachs completed a public offering of 46.7 million shares of common stock at US$123 per share for proceeds of US$5.75 billion in an offering that was well-received and oversubscribed.

Just a few weeks later, on October 27, the firm received an injection of an additional US$10 billion under the Capital Purchase Program (CPP) funded by the US Treasury’s Troubled Asset Relief Program (TARP). Lloyd Blankfein, the firm’s chairman and CEO, noted that while the firm had neither sought nor expected such an infusion of capital from the Treasury, it appreciated its value in light of market conditions. “We view the TARP as important to the overall stability of the financial system and, therefore, important to Goldman Sachs,” said Blankfein in testimony to the US Congress. He followed,

This capital […] gives us an even stronger balance sheet and increases our ability to inject liquidity across markets and extend capital to our clients….We understood that the capital we and other institutions received was designed to promote the safety and soundness of institutions deemed important to the functioning of the financial system. Adequately capitalized, these institutions would have the wherewithal to promote the flow of credit amidst potentially deteriorating economic conditions.

Goldman Sachs repaid the US government’s US$10 billion TARP investment just eight months later with US$1.41 billion of profit for the lender. The repayment, when combined with preferred dividends paid, represented an annualized 23 percent return for US taxpayers.

In March 2011, Goldman Sachs announced it would exercise its option to buy back the Berkshire Hathaway shares two years early. The firm had secured the approval of the Federal Reserve to make the payments after a review of its balance sheet.