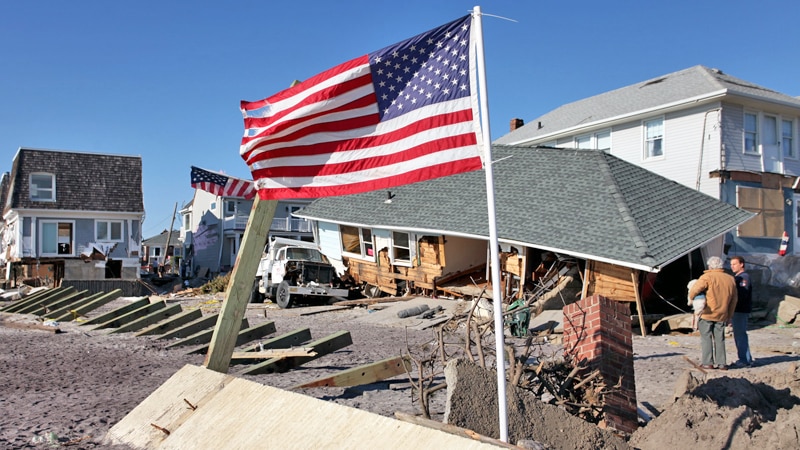 Hurricane Sandy floods the streets of New York City in October 2012, disrupting markets and damaging surrounding communities. Goldman Sachs responds with US$10 million in support of recovery efforts and the work of more than 1,200 of its people through the firm’s Community TeamWorks initiative.

After Hurricane Sandy slammed ashore in the New York City area in late October of 2012, storm surges inundated Lower Manhattan and many of the outlying communities, including Brooklyn, Queens and Staten Island. The storm posed a challenge to the operation of financial markets in general, and Goldman Sachs’ offices in Manhattan and Jersey City in particular. Damage left in the storm’s wake would also serve as a rallying point for the firm’s philanthropy and community service, helping local communities to rebuild.

Hurricane Sandy formed in the Caribbean before moving up the East Coast of the United States. While its impact would reach into the Midwest, its arrival on the shore of New Jersey just south of New York City brought tidal surges and floodwaters into the city’s streets and subway tunnels, paralyzing Lower Manhattan. Nasdaq and the New York Stock Exchange (NYSE) would close for two days, the first such multiday closing for the NYSE due to weather in more than 120 years. By the storm’s end, Sandy would cause roughly US$19 billion in damage to homes and businesses in the New York City area.

While much of Lower Manhattan lost power, pockets of functioning utilities dotted the map. The Goldman Sachs building at 200 West Street sustained only slight damage, never losing power, and the firm reached out to the local community via television and social media, offering free water and charging stations.

Within days of Sandy’s arrival, as the storm receded, the firm took on a greater role in helping area residents and small businesses in their rebuilding efforts. Goldman Sachs committed a total of US$10 million to relief and recovery efforts, including US$5 million in small business loans from its Urban Investment Group and US$5 million in grants from Goldman Sachs Gives, the firm’s donor-advised fund. These grants would help fund long-term housing and small business reconstruction and recovery.

Beyond financial support, Goldman Sachs coordinated a strategic volunteer response through its Community TeamWorks initiative. In all, nearly 1,200 Goldman Sachs people, including CEO Lloyd Blankfein, along with friends and relatives, participated in widespread on-the-ground clean-up efforts.

The firm also worked closely with its Tierra del Fuego partner the Wildlife Conservation Society (WCS) to assist in the funding and post-hurricane revitalization of the New York Aquarium. Goldman Sachs served as sole manager of the WCS’s US$44.4 million offering in Series 2014A revenue bonds issued on January 30, 2014 in support of the Aquarium’s expansion.

The Goldman Sachs response to Hurricane Sandy — utilizing its capital, expertise and the power of teamwork to help members of the local community recover — is representative of the firm’s culture and commitment to serve in the communities where its people live and work.