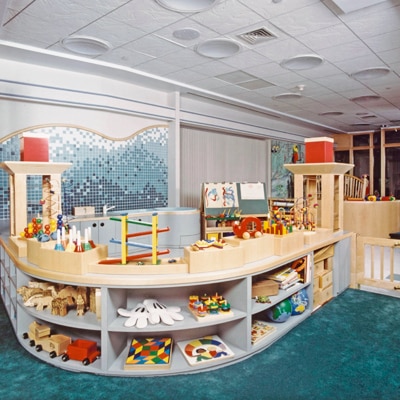 Dependable child care has always been a critical need for working parents. A 1993 study estimated that, at the time, nearly 20 percent of working parents had children under the age of six. That same year, Goldman Sachs opened the firm’s first onsite back-up child care facility at its headquarters at 85 Broad Street in New York City, recognizing the challenges that many of its employees face when their primary child care arrangements become unexpectedly unavailable.

The Back-Up Dependent Care Program became available to all New York employees who were legal parents/guardians, providing care for children from three months through 12 years of age. Embraced by many of the firm’s working parents, the program was instituted in other global offices in the years to follow. Back-up child care centers opened in London in 2003 and Jersey City in 2004. Later, full-time child care centers opened in Tokyo in 2009, Bengaluru in 2011, and Salt Lake City in 2017. By 2016, the Bengaluru child care center had tripled in capacity, making it one of India’s top corporate child care offerings in both quality and capacity.

Goldman Sachs’ first Business Principle states that the firm’s people are one of its most important assets. Accordingly, the firm offers numerous benefits geared toward helping employees balance work demands with family needs. In addition to back-up child care facilities, examples include expectant parent seminars, transitional programs for employees returning from parental leave, and adoption stipends. These efforts contributed to Goldman Sachs consistently being named among Fortune’s annual “100 Best Companies to Work For” beginning with the magazine’s inaugural list in 1998. Additionally, Goldman Sachs has repeatedly been recognized by Working Mother magazine as one of the “100 Best Companies,” a distinction earned based on factors such as workforce representation, parenting support services, benefits and advancement programs.