In 1894, Coca-Cola was sold in bottles for the first time in Vicksburg, Mississippi. In Paris, the International Olympic Committee was founded at the Sorbonne University. Karl Benz’s “Velocipede” became the world’s first production car, with 1200 units. Construction was completed on London’s Tower Bridge. Albert Turpain sent and received the first radio signal using Morse code. The US Golf Association was officially formed. 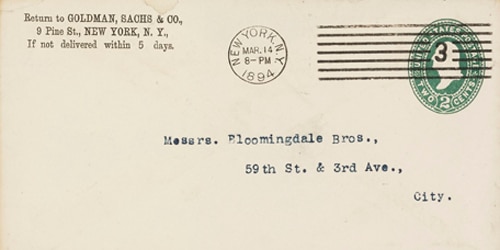 At the time, New York was the most important financial center of the United States, importing capital from Europe and distributing it across the continental states. New York also attracted domestic capital which funded the money market and smoothed the seasonal peaks of credit demand from rural, agricultural-producing regions of the country. In 1894, the total value of issued bonds in the United States reached US$309.8 million, and the value of offered stocks was US$251.2 million.

After the Panic of 1893, an economic recession ensued. Between 1894 and 1896, the US Treasury had to issue bonds for US$260 million to increase the gold reserves of the country and allow the resumption of specie payments. Economic recovery in 1897 was followed by a wave of mergers and acquisitions, inaugurating an era of big industry and even bigger modern corporations.

Twenty-five years after Marcus Goldman had arrived in New York, his firm had five partners: himself, Samuel Sachs, Ludwig Dreyfuss, Henry Goldman and Harry Sachs (Samuel’s brother). Goldman Sachs’ offices were at 9 Pine Street and 10 Wall Street, mere steps away from the Victorian New York Stock Exchange building on Broad Street. A new neoclassical building for the Stock Exchange would be completed in 1903.

In 1894, the firm dealt in commercial paper and government securities. According to Walter E. Sachs, sales of commercial paper had risen from US$31 million in 1890 to US$67 million in 1894. In November of that year, Goldman Sachs was one of the bidders in the second US Treasury US$50 million bond issue to secure gold for the national reserve fund. Soon, the firm would leverage the opportunities presented by a growing American economy by expanding into equities trading, foreign exchange, and underwriting debt and equity issues for industrial and retail corporations.