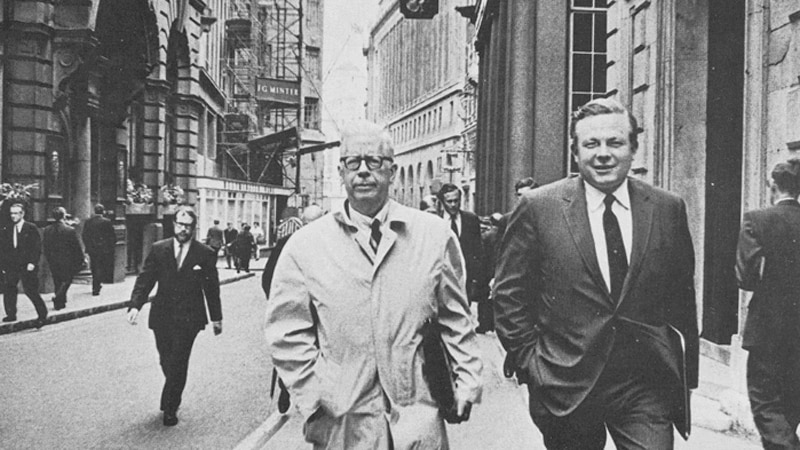 To bring Japanese commercial paper to a skeptical US market in 1971, Goldman Sachs arranges a US bank letter of credit to back up the offering from Mitsui & Co., Ltd., a centuries-old Japanese trading company.

With international opportunity on the rise in the late 1960s and early 1970s, Goldman Sachs took steps to strengthen its franchise and broaden its reach beyond US borders.

An important milestone in the internationalization of Goldman Sachs was the arrival in 1969 of Henry “Joe” Fowler, former US Secretary of the Treasury under President Lyndon B. Johnson. While Fowler joined as a partner and chairman of Goldman Sachs International Corporation, he viewed himself as more of the firm’s ambassador than rainmaker, and his contacts and stature as former Treasury Secretary (1965-1968) proved valuable to the firm’s efforts to build its international presence, credibility and client base.

One of Fowler’s contacts worked at Mitsui & Co., Ltd., a 300-year-old Japanese trading company. It was here the firm would make its seminal mark in Japan. In 1971, the firm’s International Department directed the effort to bring Japanese commercial paper to a skeptical and resistant US market. To assure private investors, the International Department arranged a US bank letter of credit to back up the paper, boosting confidence in the credit quality of the offering. With the success of this 7 percent, US$20 million Eurodollar bank loan in hand for Mitsui & Co. USA, the firm soon brought on board more Japanese companies who found this low-cost source of funds attractive.

The first Mitsui commercial paper offering was followed in 1972 by a US$20 million loan arranged by Goldman Sachs International Corporation, Bank of America and Associated Japanese Bank International, further raising the firm’s profile in Japan. In 1974, the same year that the firm opened a representative office in Tokyo, Smith Barney & Co., Nomura Securities and Goldman Sachs underwrote US$20 million of 8.25 percent convertible debentures on behalf of Mitsui & Co. in the bond markets in the United States, Europe and the Middle East. This issue was the first Japanese bond ever rated in the United States.

In 1989, Goldman Sachs was an advisor to Wilsey Foods in the sale of its food division to Mitsui & Co. More recently, in 2014, Mitsui Global Investment, a unit of Mitsui & Co., and Goldman Sachs invested US$50.8 million (3,150 million rupees) in consumer goods firm Global Beverages & Foods Pvt. Ltd., in India.