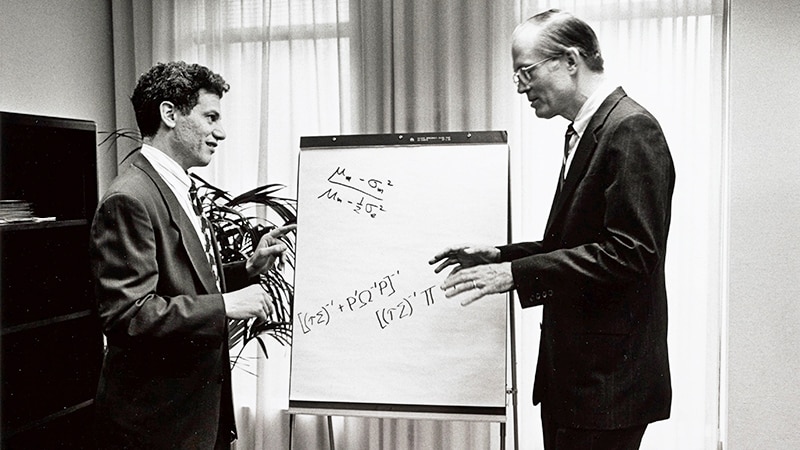 During his tenure of just more than a decade at Goldman Sachs, Fischer Black leveraged his extraordinary talents to combine creative theoretical finance and market-driven strategies for the creation of practical financial tools. One of these was the Black-Litterman Global Asset Allocation Model.

While the more famous Black-Scholes Option Pricing Model was developed prior to Fischer Black’s move to Goldman Sachs’s Trading and Arbitrage Division led by Robert Rubin in 1984, innovations such as the Black-Litterman Global Asset Allocation model and the Black-Derman-Toy Model for pricing fixed income derivatives were developed while he worked at the firm.

In 1986 — the same year he was named a partner — Fischer Black brought Bob Litterman, a PhD in economics from the University of Minnesota, onto the Goldman Sachs Fixed Income Research team. Three years later, the two were tasked with creating an asset allocation model to help clients diversify their global bond portfolios.

The goal was to create a quantitative and disciplined approach to structuring international bond portfolios in a manner consistent with the portfolio manager’s unique view of markets. The model could also be used in reverse, evaluating an existing portfolio to quantify the investor’s implied viewpoint on various markets as reflected in current holdings. The user of the model needed only to determine where his or her assumptions regarding returns diverged from the market view and the degree of confidence in these contrarian assumptions. With this input, Black-Litterman would calculate the appropriate asset allocation.

Developed in 1990, the Black-Litterman model became a prized asset of the recently formed Goldman Sachs Asset Management (GSAM) Division, established in 1988. Fischer Black himself moved to GSAM in 1990 and the model, initially used exclusively for bonds, was extended to equities in 1991.

The Black-Litterman model was published in the Journal of Fixed Income in September 1991. In the article, Black and Litterman outlined the value of their model: “This new asset allocation approach lets investors derive portfolios that appear balanced and reflect their views, without resorting to arbitrary constraints on portfolio composition […] The model also lets portfolio managers incorporate their market views in a manner that approximates the way they actually think about their outlook.”