When John Weinberg retired in 1990, Stephen Friedman and Robert Rubin, who for the past three years had served as the firm’s vice chairmen and co-chief operating officers, became co-senior partners and co-chairmen of the Management Committee of Goldman Sachs.

Born in New York City in 1937, Steve Friedman joined the Investment Banking Division (IBD) of Goldman Sachs in 1966 after earning a BA from Cornell University in 1959 and an LLB from Columbia Law School in 1962. He was named partner in 1973 and became a member of the firm’s Management Committee in 1982. During his tenure at the firm, Steve acted as co-head of both the Investment Banking and Fixed Income Divisions and head of Mergers and Acquisitions. Notably, Goldman Sachs took the stance during the takeover frenzy of the mid-1980s to represent only the targets of hostile bids, further strengthening its client relationships and reputation as a trusted advisor. 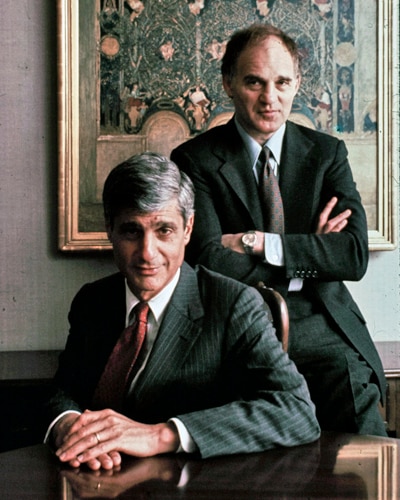 Between 1985 and 1988, Steve’s co-head of Fixed Income was Bob Rubin. Born in New York City in 1938, Bob had also joined Goldman Sachs in 1966, as an associate in Risk Arbitrage. He held an AB from Harvard College (1960) and had earned an LLB from Yale School of Law in 1964. He was named partner in 1971 and was tapped to become co-head of the Trading and Arbitrage Division in 1977. Appointed to the Management Committee in 1980, Bob was the committee member responsible for the firm’s J. Aron Division, which focused on currencies and commodities. In 1984, Bob asked financial economist Fischer Black to join the Trading and Arbitrage Division and lead the firm’s ongoing efforts in quantitative trading and model-based risk management.

Steve and Bob were another example of a dynamic and highly complementary team of co-heads. Trained as lawyers, they were known among colleagues for their propensity to ask questions and probe problems from many angles. Both brought a deep understanding of trading risk to their leadership roles, and Bob pushed the firm to explore – and in some cases pioneer – new opportunities in the area of trading. Steve helped vastly extend the firm’s global reach, seeking to elevate Goldman Sachs’ status in markets outside the United States to the same leading level it enjoyed domestically. He would also lead a push for new initiatives in the area of principal investments. Under Steve and Bob’s leadership, the firm expanded and reinforced the back-office operations that were growing increasingly critical to supporting the firm’s complex global businesses.

Steve and Bob’s dual leadership would last only two years, however. In 1992, Bob Rubin departed the firm to serve as President-elect Bill Clinton’s special assistant on economic affairs and director of the newly created National Economic Council. Steve Friedman was named sole senior partner, a role in which he would serve until his retirement in 1994.

Both Steve and Bob would go on to have careers in public service after leaving the firm. Among the many roles they held, Bob was appointed as the United States’ 70th secretary of the treasury under President Clinton in 1995, a position he held for four and a half years. Steve served as assistant to President George W. Bush for economic policy as well as director of the National Economic Council in the early 2000s and would go on to be appointed chairman of the Federal Reserve Bank of New York in 2008.