As Goldman Sachs marked its 125-year milestone, the North American Free Trade Agreement (NAFTA) between the United States, Canada and Mexico went into effect. That same year, Nelson Mandela was elected President of South Africa, just four years after his release from more than 27 years in captivity. The Channel Tunnel, commonly known as the “Chunnel,” opened, connecting England and France. BMW purchased British vehicle manufacturer Rover from British Aerospace and the Dow Jones Industrial Average closed the year at 3,834 units.

The Fortune 500 list featured General Motors in the top spot, with revenues of US$133 billion. Ford Motor, Exxon Mobil, IBM, and General Electric rounded out the top five. Real GDP in the United States came in at US$10.51 trillion (compared to US$18.22 trillion in 2017). 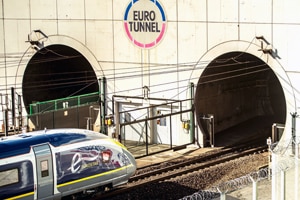 The Velaro E320 train being tested during the inauguration of a new Eurotunnel freight line in the Chunnel Tunnel, Coquelles, France 2015

For Goldman Sachs, 1994 was a year of challenge and change. The firm experienced a number of trading losses in its J. Aron and Fixed Income Divisions due to severe downturns in bond and currency markets after interest rates rose around the world and the Japanese yen rose against the US dollar. In the wake of these losses, the firm saw an unusually large number of partners retire, taking their capital along with them. In September of that year, Steve Friedman resigned as senior partner, succeeded by Jon Corzine, and Hank Paulson was named vice chairman and chief operating officer.

The challenges of 1994 triggered a reexamination of the firm’s corporate and capital structure, leading to the creation of the Partnership Committee in 1995 and ending with the firm going public in 1999. The partnership modified its risk profile in several of the most volatile markets and expanded its risk models and protocols, including SecDB, a platform to price trades and assess the risk of the firm’s trading positions.