In 1999, the Management Committee of Goldman Sachs selected a diverse group of experienced senior professionals from within the firm to form the Leadership Development Advisory Committee. This group’s official charter was to “assess the future training and development needs of Goldman Sachs, with particular focus on the need for a more systematic and effective approach to developing leaders.” The task was especially critical given that Goldman Sachs had recently completed its IPO, transitioning from a closely held partnership to a public company, and was rapidly growing its global employee base.

After six months of extensive internal and external research, including interviewing employees and outside experts and conducting benchmarking studies of best practices, the Leadership Development Advisory Committee presented a recommendation to the Management Committee, the cornerstone of which was the formation of a dedicated leadership development practice for senior-level employees. The group was named Pine Street, a nod to the location in Lower Manhattan where Marcus Goldman began his business as a broker of promissory notes in 1869. 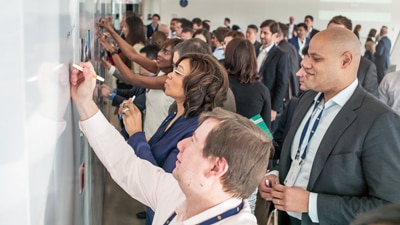 Members of the Partner Class of 2018 during Pine Street Orientation, New York City, 2019.

Pine Street was built from the ground up: while the Leadership Development Advisory Committee borrowed key learnings from its extensive research in developing the practice, the group molded them to fit the firm and its own standards regarding the most important elements of leadership in an intensely teamwork-oriented culture. Similar to the way the firm’s 14 Business Principles established a shared vision and vernacular for what the firm stands for in 1979, Pine Street instituted a common leadership language and skill set across the firm globally. This was particularly important given the fact that, in 2001, of Goldman Sachs’ then more than 20,000 employees, nearly half had been with the firm for less than two years.

Since the first Pine Street Leadership Program was held in New York on March 22, 2001, the scope of the initiative evolved and expanded based on shifts in the global business landscape and resulting changes in the firm’s leadership needs. In 2005, Pine Street partnered with the firm’s Executive Office to institute the Chairman’s Forum, a specialized program for senior leaders in the firm tackling issues related to business judgment, accountability, and protecting the firm’s reputation.

Through the years, Pine Street also moved in the direction of offering fewer, more experiential programs targeted at critical points in a partner’s career, with a strengthened focus on executive coaching and executive assessments. While necessarily evolving with the needs of the business and the marketplace, since its inception Pine Street has remained true to its core objectives: to advance the culture of Goldman Sachs and to develop world-class leaders who embody that culture and are poised to grow the firm’s business and drive its strategic objectives into the future.

Pine Street continues to prepare partners and select managing directors to lead the firm’s next generation of people and businesses. In pursuit of this mission, Pine Street aims to be a world-class leadership development organization that enhances the reputation of Goldman Sachs as an institution committed to leadership excellence, cultivating leaders who help the firm capitalize on opportunity.