On September 11, 2001, coordinated terrorist attacks against the United States using hijacked planes hit New York’s World Trade Center towers, the Pentagon building and a remote field in Pennsylvania. While global markets are disrupted and temporarily shut down, the attacks trigger worldwide outpouring of support, an international quest for justice and a pledge to rebuild Lower Manhattan. 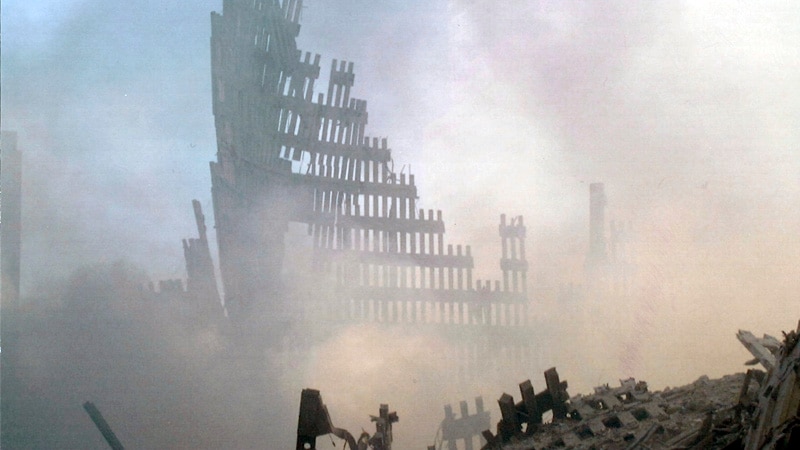 The deadliest terror attack in US history began when two hijacked commercial airliners crashed into the World Trade Center’s iconic Twin Towers in New York on September 11, 2001. In less than two hours, both towers would collapse due to the damage. That same morning, another hijacked airliner slammed into the Pentagon, the headquarters of the US Department of Defense in Northern Virginia, near Washington, DC. A fourth hijacked plane crashed in a field near Shanksville, Pennsylvania, when passengers attempted to retake control of the plane from the hijackers. Nearly 3,000 people died in the coordinated attacks, and countless others sustained injuries and long-term illnesses.

Following the attacks, suspicions fell on the Islamist extremist terrorist group al-Qaeda, formed at the end of the Soviet occupation of Afghanistan in 1988 and led by Osama bin Laden. The group had been connected to earlier terrorist plots, including the August 1998 bombings of the US embassies in Dar es Salaam, Tanzania, and Nairobi, Kenya, and the October 2000 attack of the US Navy destroyer USS Cole in Aden, Yemen.

The attacks on the World Trade Center towers caused extensive damage to Lower Manhattan, disrupting power, communications and travel. Between 350,000 and 500,000 commuters isolated on the lower tip of the island were evacuated by a flotilla of boats that included US Coast Guard ships, police and fire boats, commuter ferries and an array of private vessels. Civilian air travel came to a halt as planes were grounded, stranding tens of thousands of passengers.

The terrorist attacks created uncertainty in the financial markets and negatively impacted the US economy. The destruction of the World Trade Center brought to a halt the world’s leading financial center. The New York Stock Exchange (NYSE), the American Stock Exchange (now NYSE MKT), and Nasdaq did not open on September 11 and remained closed for the rest of the week. This was the longest NYSE shutdown since 1933, one of the worst years of the Great Depression. Trading in bond markets also stopped for two days, as several financial and brokerage firms (most notably Cantor Fitzgerald) had offices in the World Trade Center and could no longer operate with the collapse of the Twin Towers and the devastating loss of their employees.

To prevent a financial crisis, the Federal Reserve provided ample liquidity, bought a massive amount of government bonds and lowered interest rates. After extraordinary emergency efforts involving the President’s Working Group on Financial Markets, the Treasury Department, and the Securities and Exchange Commission, financial markets reopened on Monday, September 17, accommodating the highest-volume day until then on the NYSE. On that first day of trading, the Dow Jones index plunged 685 points or 7.1 percent, with airline and insurance stocks hit particularly hard. The markets showed their resilience when they returned to pre-attack levels within a month. While this helped to stabilize financial markets, the economy was in recession, still suffering from the burst of the dot-com bubble that began in March 2000.

While no Goldman Sachs employees died in the 9/11 attacks, many family members and friends perished and certain properties of the firm were also affected. In a voicemail to all at Goldman Sachs on September 14, 2001, then-CEO Hank Paulson noted the extraordinary efforts undertaken throughout the firm to weather the crisis brought about by the attacks. Offices around the world shouldered the workloads normally handled in New York. Team members slept on floors, relocated offices to nearby Princeton, New Jersey, and eventually went to great lengths to return to the firm’s Manhattan offices once it was deemed safe to do so.

Goldman Sachs took an active role in the recovery and support of victims in the aftermath of 9/11. Just two days after the attacks, the firm announced the creation of the Goldman Sachs Relief Fund, which raised and distributed more than US$11 million for the families of the victims. In the months to come, the firm mobilized 600 volunteers at Ground Zero. On November 29, 2001, former senior partner John Whitehead was named Chairman of the Lower Manhattan Redevelopment Corporation, the agency organized by the State of New York to help rebuild and revitalize the area. Two weeks later, on December 14, 2001, the firm’s vice chairman Bob Hurst was chosen to serve as CEO of the 9/11 United Services Group, an umbrella group of leading non-profit organizations and human services agencies formed to coordinate and speed assistance to victims of the September 11 attacks in New York.

Goldman Sachs’ commitment to rebuilding Lower Manhattan took its most prominent form in the building of its new headquarters at 200 West Street, just blocks from the site of the attacks and what later became the location of the National September 11 Memorial and Museum. The firm broke ground on the new headquarters in November 2005 and it officially opened for business on November 16, 2009.

A message to the entire firm from then-CEO Hank Paulson a month after the attacks summed up the extraordinary efforts put forth throughout the firm to face and transcend the challenges of the September 11 attacks: “Day by day your resilience, your ingenuity and your teamwork are demonstrating that the success of any great enterprise always depends upon the character and qualities of its people. We have been facing the worst, and you have been giving us your very best. And the lesson here is that our principles will never fail us as long as we do not fail to live up to them.”