After US markets plunge on October 19, 1987, equity markets around the world decline, underscoring the interdependence of global financial markets. 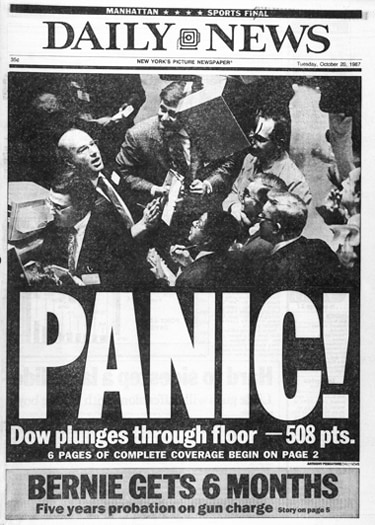 On October 19, 1987, the Dow Jones Industrial Average (DJIA) fell 508.32 points, a decline of 22.61 percent, ending a bull market that had lasted since August 1982. A record volume of 604.33 million shares traded hands that day, three times the daily average. The New York Stock Exchange (NYSE) lost more than US$500 billion in market capitalization, its largest loss since the beginning of World War I in 1914. The DJIA’s collapse on what came to be called “Black Monday” greatly surpassed its 12.8 percent single-day drop on Black Thursday of October 28, 1929.

Events that day reflected concerns over inflation, a weakening dollar, rising oil and commodity prices, protectionism, tensions between the United States and Iran, and the potential end to a long economic expansion. Shortly before Black Monday, US Treasury Secretary James Baker had criticized West Germany’s recent interest rate hike. When markets crashed a week later, however, Baker and his German counterparts agreed on the need to maintain rates at their prevailing levels, which panicked investors interpreted as a harbinger of recession in the United States and developed economies.

Black Monday starkly illustrated how interconnected—and interdependent—global financial markets had become. Between October 19 and 23, the Financial Times 100 Index in London was down 25 percent, and in Tokyo, the Nikkei Dow Jones average dropped 13.2 percent. Both the Chicago Board Options Exchange and the Chicago Mercantile Exchange were forced to suspend trading. Stock exchanges in Hong Kong, Frankfurt, Amsterdam, Mexico City and Sydney, among others, experienced heavy losses as well. The crash nearly derailed the offering of the UK government’s stake in British Petroleum, for which Goldman Sachs was a lead underwriter in the United States.

On October 20, the Federal Reserve announced that it would provide liquidity to the financial system to assure that the markets would keep functioning. The Fed’s action offered a measure of relief to the broader system, and markets around the world gradually improved. By mid-1988, the stock market had fully recovered and on December 31, 1988, the DJIA was nearly 25 percent higher than it was at the end of Black Monday.

In contrast to the financial and economic upheaval that followed the crash of 1929, the US economy did not experience a prolonged economic decline after Black Monday; in fact, it resumed a growth trajectory. Following the crash, the NYSE implemented new ‘circuit-breakers’ designed to halt trading and prevent a market meltdown similar to Black Monday from occurring again.