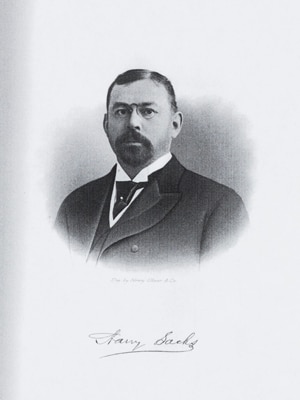 When Marcus Goldman brought his son-in-law Samuel Sachs on as his business partner in 1882, neither man could know that it would be the beginning of a partnership that would last for more than a century and a half, employing generations of both families.

Samuel Sachs had an early and enduring impact on the firm through his measured and thoughtful approach to growing the business, his efforts to drive the firm’s expansion into foreign markets and his acute client focus. Another of Samuel’s key contributions would come into sharp relief after the financial crash of 1929: the strong capital base he helped create. When the Great Depression struck in the United States, the capital Samuel and his brother Harry had invested in the partnership played a critical role in the firm’s survival.

Three of Samuel’s sons would also join Goldman Sachs around the turn of the twentieth century: Arthur and Paul in 1900, and Walter in 1908. Like his father, Arthur was keenly focused on expanding the firm’s international financing presence. In 1919 and 1920, he established new currency trading accounts in Amsterdam and Paris. He also helped to fill the leadership vacuum that existed at the firm when Henry Goldman retired, acting as the key partner in virtually every major Goldman Sachs financing in the late 1910s. 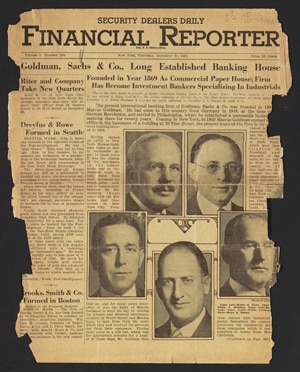 Around that same time, Arthur’s brother Paul was being groomed for a leadership role within the firm, handling relations with the firm’s UK partner Kleinwort, Sons & Co. and key clients that included companies like the Studebaker Corporation and F. W. Woolworth Co. Yet Paul’s passions lay elsewhere: in 1915 he left the firm to become an assistant director at Harvard University’s Fogg Museum, where he would become a major figure in the art world, training generations of museum directors and curators.

Walter Sachs, who joined his father and brothers at Goldman Sachs in 1908, was the first employee to be trained in Europe. He was admitted to the partnership in 1910 and became co-senior partner with Arthur in 1930 upon the resignation of Waddill Catchings, who had been brought into the firm in 1918 by Arthur Sachs. Walter too, lent stability — in the form of both leadership and capital — in the wake of the financial crash of 1929 and the ensuing failure of the Goldman Sachs Trading Corporation.

The Sachs family’s presence at the firm continued in the decades that ensued. Peter Sachs, a descendant of Samuel Sachs, worked at the firm until his retirement in 1990: Peter was Howard’s son and Samuel’s great nephew and had worked at Goldman Sachs since 1969. Peter’s retirement marked a century-plus span of Sachs family members at the firm, an extraordinary and enduring legacy.