In 1871, Japan established its first postal system. Four years later, it added postal banking services modeled on Great Britain’s system, which allowed savers to deposit funds at local post offices. By 2013, Japan Post Holdings’ banking subsidiary was the largest retail bank in the country measured by savings and deposits, and they had diversified into insurance and other financial services, becoming a crucial arm of the Japanese state.

2015 marked the culmination of a plan nearly a decade in the making to privatize the massive, multi-pronged public institution. Initiated under the leadership of then-Prime Minister Junichiro Koizumi, the plan reached its fruition under Prime Minister Shinzo Abe. The main objective remained the same: to spur investment by Japanese households whose high savings rates, policymakers thought, were hindering the country’s economic growth. It was also believed that privatizing the banking and insurance arms of Japan Post Holdings would increase the efficiency of the country’s financial sector while reducing the government’s reliance on postal banking funds. Finally, the IPO proceeds were earmarked for reconstruction work in the northeastern part of the country following the massive 2011 Great East Japan earthquake and tsunami. 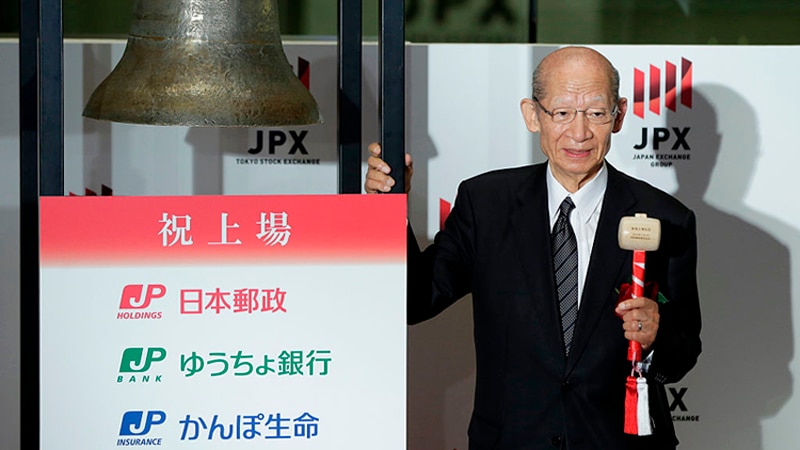 Taizo Nishimuro, President and CEO of Japan Post Holdings, before the company’s listing on the Tokyo Stock Exchange, November 4, 2015. (Photo by: Kiyoshi Ota/Bloomberg via Getty Images)

Japan’s Ministry of Finance (MOF) engaged Goldman Sachs as a joint global coordinator and joint book runner for the IPO, of which 80 percent of the shares was reserved for domestic investors. The offering was met with strong demand from the Japanese public, to whom Japan Post Holdings and its subsidiaries were a trusted, recognized name. Raising JPY1.35 trillion (nearly US$12 billion), the IPO was the largest of the year and the biggest since Alibaba’s 2014 debut. In 2017, Goldman Sachs was joint global coordinator of Japan Post Holdings’ US$11.7 billion follow-on equity offering.

For Goldman Sachs, the IPOs of Japan Post Holdings, Japan Post Bank, and Japan Post Insurance were another important milestone in a history of strong partnership with Japan’s MOF, particularly in the privatization of state-owned enterprises. The firm had assisted as co-lead in the MOF’s very first global equity offering (Japan Tobacco) in 1996 and had served jointly as global co-lead for NTT Mobile Communication Network, Inc. (NTT DoCoMo), the largest-scale global IPO in history at the time, in 1998.